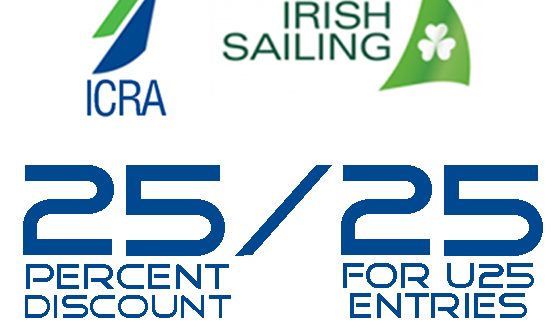 Without hesitation, J/24 event hosts, Carrickfergus Sailing Club, Sligo Yacht Club, Foynes Yacht Club and Howth Yacht Club have all recognised the importance on ICRA’s recently launched 25 / 25 scheme which will build on the ICRA / Irish Sailing U25 Support Programme to encourage young sailors to stay active in the sport and to foster their continued commitment.

The Irish J/24 fleet takes pride in its approach to U25 sailing and has been somewhat of a trailblazer in its focus. Howth Yacht Club set the ball rolling in 2009 establishing the K25 initiative with the inaugural crew skippered by Cillian Dickson setting the standard for those to follow. A highly professional and dedicated approach saw the crew win several Irish J/24 National Championships, and twice become crowned U25 J/24 European Champions including a third place overall in 2015. Even more pleasingly, following a brief hiatus, the crew has returned to the fleet in 2019 to win the National Championships.

The Irish fleet was further inspired by highly competitive U25 J/24 crews from Germany and the Netherlands participating in J/24 European 2011 and World Championships 2013 both held at Howth Yacht Club. This led to continued growth, with U25 crews from across Ireland making up nearly 20% of the record-breaking entry of the 2019 Irish National Championships at Lough Erne Yacht Club.

“The growth in Under 25 crews with the Irish J/24 Fleet in recent years has been amazing and it is just reward to visionaries like Brian McDowell at Howth Yacht Club and numerous other champions of the initiative in clubs throughout Ireland. We’re also indebted to the support provided by ICRA, WIORA and Irish Sailing.” enthused Class President Mark Usher.

“Another great example is Tadhg O’Loingsigh and his crew from Tralee Bay Sailing Club. They worked really hard with great support from their club to become Irish U25 J/24 Champions in 2019. This qualified them for the prestigious J/24 World Championships in Poole in 2020, their success certainly demonstrates this structured approach to Under 25 sailing works” continued Usher.

The J/24 European Championships 2021 at Howth Yacht Club will have an U25 category providing Irish crews the opportunity to compete at an international level. This further demonstrates how the J/24 can provide affordable regional, national and international competition, it is, therefore, no wonder that many clubs across Ireland are sourcing boats to become part of the fleet.